Crystal Bunnytail has been very busy so far this year thinking about the Earth and her place on her Path.  Work, Study, Exercise, Nutrition, Meditation and Spiritual Practice... 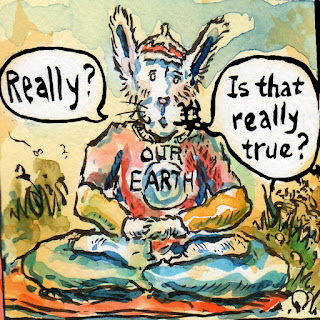 Crystal has been adding thought to her morning activities.  She includes, spiritual reading, meditation, and a Yogic Salutation to the Sun in hopes of helping to tune her body and mind towards health and harmony.

There are so many paths for a bunny - even within the path of Yoga.

taken from Advaita Yoga Ashrama (AYA),
Truly, there are as many paths as there are people. Practically though, there are a few hundreds of yogas, or practices which are categorized into the four main paths. These paths are:

The path of wisdom and knowledge. The jnani uses his will and power of discrimination to cut through the veil of ignorance and attain the truth.
For the jnani, the goal is absolute Truth.
Jnana Yoga appeals to the philosophical and intellectual temperament.

The path of love and devotion. The bhakta uses the combined energies of all emotions and transmutes them, sublimates them into the highest of all emotions: prem.
Prem is pure, conditionless, divine love. For the bhakta, or devotee, the goal is pure love.
Bhakti Yoga appeals to the emotional temperament.

The path of self control and self mastery. The raja yogi controls his mind until it becomes perfectly still at which time there is no more wall between himself and his own divine nature.
The main practice in Raja Yoga is meditation. For the raja yogi, the goal is perfect mind control.
Raja Yoga appeals to the mystical and scientific temperament.

The path of selfless service. For the karma yogi, the main problem is our inherent selfishness which is based on spiritual ignorance, avidya. The key is to practice selfless actions without any selfish expectations, and thereby opening one's heart and seeing God in all beings.
For the karma yogi, the goal is complete selflessness.
Karma Yoga appeals to the active temperament.

Among the additional hundred yogas out there, two more stand out as particulary important:

Derived from the tantric tradition this yoga aims at purifying the physical and psychic systems, and then awakening the cosmic power residing in the muladhara chakra at the base of the spine.
Upon awakening and raising of this spiritual power it unites with the consciousness center in the crown of the head and thereby grants liberation to the spiritual aspirant and practitoner of Kundalini Yoga .

Sometimes called the physical aspect of yoga it works mostly on the psychic level. Besides its innumerable medical benefits, hatha yoga is essential support to both raja yoga and kundalini yoga.

Blessings from a spritely Bunny yogi who is still hopping around trying to settle on where best her temperament might flourish...
... and blessings on your Path, wherever it may lead you...