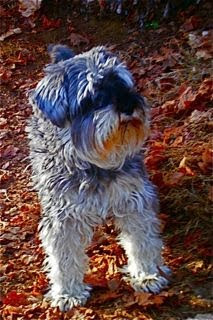 We leave a vegan dog kibble down all the time for our dogs. Friends question both the satisfaction of their canine nutritional needs and their ability to eat only as much as they need without overeating.
We have a simple answer for our dogs' self-regulating hunger patterns. They know the kibble has always been there (since puppyhood) so they will only eat when hungry. I have raised all my dogs over the years this way.
This food-always-down method was tested when we had an elderly dog staying with us for an extended visit (close to 2 years) and he would have eaten too much of the vegan kibble and not enough of his owners' recommended meat kibble. So, everyone ate the planned meals. First one then two, meals a day with little snacks tossed in and caught with relish at other times.
Then, sadly, the little guy passed on into Spirit and we could put down the kibble again. I liked not worrying about the possibility of under-feeding my fuzzy girls. But - oh my goodness! — My slightly overweight dog chowed down the ENTIRE dishful! Should I refill it? Would I have to regulate the bowl filling so this girl didn't gain a ton of weight? Thank goodness I tried another bowl full and between the two of them, they only ate half of that bowl. And thankfully, a day or two of their noticing the old bowl was once again always available, they stopped scarfing and looked on hopefully for tastier treats to be tossed their way. Now, it is back to the dish of kibble that they go to when their begging has ceased to impress our dense human brains or a little nibble of kibble before bed for better dreams.

Now for the complicated nutritional question - Vegan Dog food questions - that friends have brought up. Well, we just don't know. We have an affidavit of an owner swearing their dog lived to be 19 with this diet for its whole life. But we are still not sure, because our traditional vet has been striking the fear of cruelty into our hearts if we diverge from the status quo. We have two vets now, one for traditional diagnostics and one for herbal, acupuncture, and alternative feeding ideas as well as traditional western medical methods. This vet, is asking us for a full list of foods we feed our dogs. I've been avoiding it for the very reason I feel that nutrition is complicated.
I want to make sure I don't miss what my dogs need, so I offer variety. In fact, so much variety that I'm not sure what to put on that conclusive list of dog food. We change brands of their small amount of meat kibble (which got added into their dinner after we had a question of borderline anemia that showed up after one of the girls got a tick born disease). We give raw human grade small farm beef or chicken livers at times for all that nutritionally packed for canines. (I actually am seriously thinking of having vegan pets in the distant future when these guys go, such as rabbits, Guinea pigs, or a pot bellied pig.) But on with the list of what we feed these beautiful little girls: We've fed them super-bluegreen algae, Norwegian cod liver oil, Swedish hardtack, canned organic vegi food, yams, squashes, nori seaweed sheets, powdered hemp, powdered carob, coconut oil, avocados, vegan bakery blueberry snacks/pizza flavored snacks, snacks with a combination of oats, spirulina, bananas, shredded coconut, and I can't think what other foods at the moment.
So, what can we conclude from this way we have come to feed the dogs here? Hmm. It actually reminds me of how we feed ourselves. "Variety is the spice of life." We humans are told to get our nutritional needs met by variety, but what does this mean, and why only for humans? Ironically, I have people telling me it will make my dogs sick if I change their food choices too fast (or more like all the time). So, how might this regular/same food translate to humans?
Are humans stressing out our systems with variety? There are plenty of health practitioners who do not recommend "processed" food for just this reason. They say processed food has too crazy a mix of ingredients for our systems to pull apart for proper digestion — It's tough on us, they say. (We end up storing a lot of it as fat until we can find the time for proper breakdown i.e. our liver and kidneys are rested and ready for more digesting.) And then, what about sensible food combining such as NOT steak and bananas or beans and prunes?
Or should we go back to the days of eating varieties of local seasonal foods? Aha. Maybe going back in this way can also be moving forward?! But there is a little wrinkle. Dogs a while ago, before humans fed them regularly or before they had access to our trash cans and compost piles, ate local rodents (possibly bigger kills if they are more closely related to the coyotes and wolves), a few greens, bugs, amphibians, and maybe a berry or two. 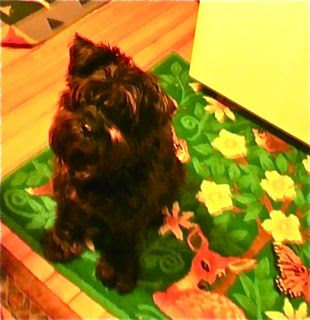 So, I asked my dogs. And, on communicating with my dogs directly, with the help of our local gnomes, I came up with a plan... (to be continued after transferring transcripts to the computer!)
Posted by Sarah at 12:08 PM No comments:

The tea kettle spoke to us today and said, “No more heat, please. I am old and wishing to be a container for cool water for others besides yourselves.”
“Who?” I asked back, and she looked at me with her broken wing and said, “The trees and flowers in the pots by the south facing windows.”
And I replied with a smile, “Of course.”
Who said a burnt kettle must be buried in the dump when it has no hole in its bottom? And who said, though it can no longer apply itself with a whistle for our benefit, it must be let out to the trash heap and released?
WHO told us not to listen to its quiet voice in our heads?
Much that is used by us humans is made of either non-decomposable elements or a mixture of elements which decompose and others which do not. The elements which don't decompose — such as the plastic top here which only managed to melt — will only be buried for centuries and release whatever it is plastics release into the soil as it slowly decomposes. Stainless steel lives a long time too, and is one of the few materials that could actually be remelted and reused ad ifinitem (so I have been told by a local energy researching geek). So, what are we going to do with these things which don't get repaired easily an get easily totted off to the dump? How can we reuse these things in different ways?
I asked the gnomes, "Is there anything we humans can do to stop so much of this tossing almost perfectly good things in the dump?"
"Yes, of course! We're glad you asked! Tea Kettle has already spoken how, in her heart, would like to be useful. First and foremost, listen carefully to WHATEVER object you question. They know, because it is THEIR physical bodies you are talking about.
"So, do you understand a little better now?"
"Yes, I think I do." 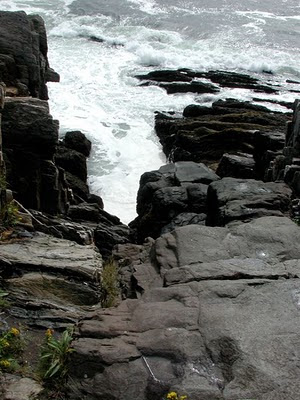 "Then you will understand that your answers lie in your CONVERSATIONS with things?"
"Yes, that makes a lot of sense."
"Well, it should, because you humans were one of the few communicators to cross communicate between the Animal, Vegetable, and Mineral kingdoms.
"Long ago you could speak to some old, faded Animal tracks and understand the pace, gait, type of Animal and what direction that Animal was heading.
"Long ago, you knew of coming storms as Wind blew ahead and spoke to Tree and Tree spoke in rustles and swishes to you.
"Long ago, you spoke to Rock and absorbed its quiet stillness and solid sense of knowing.
"And long ago, you listened to the hiss and boom of the tides and lived in your heart's pulsing.
"You must listen carefully now. There are newly manifested materials, which mean many new languages for you to understand and learn to communicate with. Listen in the quiet space in your center, where language is born. There, you will begin to understand."
Posted by Sarah at 4:30 PM No comments: